See this guy? He’s Francisco Dominguez, our Chief Technology Officer. “Cisco” is responsible for just about everything around here. The backbone of the entire company, which is the Fibernetics CLEC network, and the thing that allows more that 300,000 Canadians to communicate with the rest of the world. He oversees our websites, which informs Canadians about the products and services we provide and all our social channels as well, even this blog in fact.

Come to think of it, when it comes to this company, it’s Cisco’s world, and we’re just living in it.

And now he wants to add to his team. If you are looking to work for one of, if not the, fastest growing telcos in Canada, and for the guy who is responsible for the fifth largest telecommunications network in the country, here’s your chance, because we need a:

How to apply? Please submit your resume and cover letter by eMail: careers@fibernetics.ca
(Be sure to quote the position in your subject line).

KITCHENER, Ontario — Twenty years ago, no one would have believed the Kitchener-Waterloo area would blossom into the most vibrant technology start-up community in Canada – the Silicon Valley of the North.

The twin cities of about 400,000 people 70 miles west of Toronto were then known as the market hub for the German farming communities that stretched in all directions. But one young company, Research In Motion, gained international attention with its iconic BlackBerry cellphones. That generated the growth of a start-up hub that can’t quite rival Silicon Valley, but compares well with Austin or Boulder, Colo.

RIM (which now does business under the trade name BlackBerry) has risen and stumbled, but the Kitchener-Waterloo start-up community is thriving, with about 1,000 start-ups and particular strength in mobile technologies. Its success is the result of its attractive costs compared with larger centers, its proximity to the industrial base of nearby Toronto, and the benefit of being home to University of Waterloo, one of the country’s leading engineering schools.

A spirit of cooperation has helped to develop the community, he adds. “Here, it’s not that everyone is competing for software engineers. People just want to help you out.”

Fibernetics partner getting notice south of the border

That spirit of community led two decades ago to the creation of Communitech, a start-up accelerator. It began as a mentoring partnership between industry and academia, and two years ago opened a 50,000-square-foot innovation center that Communitech CEO Iain Klugman says is “unique.” Not unique in Canada. Unique anywhere.

“If there’s anyone else doing anything like this in the world, I’d like to hear from them,” said Klugman, sitting in the common area of the meandering facility in a former tannery. “I haven’t found them yet.”

About 100 companies work within Communitech, a sparse assembly of interconnected rooms whose concrete walls are adorned by the work of local artists. It houses a seed-stage accelerator, two university start-up incubators and an accelerator for later-stage companies. There are also 12 established companies renting space. Major corporations such as Google and BlackBerry have offices so they can work with start-ups. Banks, accountants and lawyers have booths. There’s a $22 million low-orbit satellite project underway in a back room, with the first satellite to be launched this summer.

In addition to its 100 tenants, Communitech works with about 600 other start-ups outside the facility.

“I fell in love with Communitech from the first time I saw it,” said Tony Abou-Assaleh, CEO of TitanFile, which has pioneered a high-security, easy-to-use document-sharing system. “I wanted to be there because of the unbounded energy.”

Abou-Assaleh and co-founder Milan Vrekic took TitanFile into the HyperDrive seed accelerator at Communitech, which has helped to nurture a company that won national awards in Canada and has drawn angel and venture-capital financing. One reason his company has thrived is the communal spirit found in Kitchener-Waterloo and the willingness of seasoned executives to mentor the newer companies.

“In other parts of the world, people have to pay for such advice,” said Abou-Assaleh. “Having such advice given to you at no cash cost is a great benefit to a company that has to preserve its cash.” 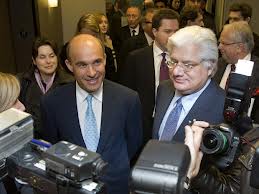 Among those who have given freely of their time and knowledge are former BlackBerry co-CEOs and co-founders Mike Lazaridis and Jim Balsillie. BlackBerry—which is struggling to turn itself around with its new operating system and a new line of phones – is still the dominant tech company in the twin cities, and still provides talent and mentorship to the start-up community.

“What I try to do is to expose these folks to the technological realities of commercialization and growing globally,” said Balsillie, who retired last year. He said in the last five to six years, the global start-up world has become a “minefield” in which one misstep can cost an entrepreneur a company. He worked privately with about 30 founders and CEOs, offering frank strategic advice.

Balsillie also serves as an adviser to Magnet Forensics’ Belsher, a former RIM executive, and the two often talk informally about how to scale up the business. The advice — or something — is obviously working. Magnet has increased revenue 1,800% over two years, and now has 1,500 clients, including law enforcement agencies in about 100 countries.

Balsillie said Kitchener-Waterloo has succeeded largely because of the quality of its entrepreneurs.

“It comes down to good entrepreneurs and good ideas and the support of the community,” said Balsillie. “It starts with the entrepreneur and the idea has to be substantial.”

Fibernetics is one of Canada’s fastest growing telecommunications companies and offer a high energy, professional yet casual work environment with the opportunity to make a difference every day.

It’s an environment where everyone’s contribution is valued and rewarded. We take pride in our ability to have fun and celebrate our successes together. In return, we are looking for people who are creative and passionate about their work. Successful employees have an entrepreneurial spirit and a passion for technology. If we are describing you, then consider becoming a part of the Fibernetics team.

How to apply? Please submit your resume and cover letter by eMail: careers@fibernetics.ca
(Be sure to quote the position in your subject line).

START YOUR CAREER WITH FIBERNETICS TODAY BY APPLYING FOR ONE OF THE FOLLOWING POSITIONS:

Reporting to the Director of Product Development, the Installer of Business Services performs installation and training at customer premises mostly in the South-Western Ontario region for Fibernetics and Reseller sales.

As a member of a dynamic team, the candidate will perform day to day activities relating to the support of Fibernetics business customers using Fibernetics’ digital PBX platform. The Technical Support member will be managed and directed daily with very specific instructions from the support team lead. The role will have the following responsibilities:

The Administrative Assistant will be responsible for facility administration and will be the main point of contact for visitors to Fibernetics’ head office. The ideal candidate will have experience in all of the following areas, which accompany a strong customer service background:

The ideal candidate will possess the following characteristics:

The Role:
This is an exciting part-time position which may lead turn into a full-time position in September of 2013. As a member of a dynamic team, the candidate will perform day to day activities relating to the support of Fibernetics business customers using Fibernetics’ digital PBX platform. The Technical Support member will be managed and directed daily with very specific instructions from the support team lead. The role will have the following responsibilities: