CEO Jody Schnarr and CMO John Stix share an office at the front of Fibernetics headquarters because they’ve collaborated in everything, even office space, since they started the company ten years ago, and it’s no time to break up that winning formula.

Standing guard in front of their door is their Executive Assistant Dawn Gamble, who runs their working lives, (and, to be honest, a lot of their personal lives as well).

She is the indispensable Dawn, what every successful company wants and needs.

Capable to the max, beyond her duties to the two bosses, she takes on any internal role required, as different as strategic marketing planning to changing the light bulbs in the ladies bathroom ceiling (in heels). As part of The Fun Bunch, she’s been at the heart of every fundraising venture the company has held this year. Ever capable and creative, she functions as the event and social co-coordinator for the corporation, organizing off-sites like company town halls, trade shows, even golf tournaments.

From her work space at the front of main floor office space, her desk functions as the epicentre of the company, around which everything seems to revolve. If anyone wants or needs something, seemingly the first recommendation from everyone in the company is, “ask Dawn.” Usually she’ll have the answer, and if not, she’ll know who does. As a trade off however, first you get to hear about what her son Austin or her husband Steve are up to, or her latest workout regime, or her latest healthy recipe.

Seemingly always with a side project, this week she’s been baking every night making these awesome yet healthy treats that she’s selling for $2/piece to raise money for her upcoming 5K CIBC Run for the Cure.

This is a personal for her because she is recent breast cancer survivor. Battling the disease through 2011 and most of 2012, today she has a clean bill of health.

Very few at work had any idea she even was fighting cancer because they couldn’t tell from her constantly upbeat personality.

The few who did find out did so during her chemotherapy only after asking her if she was “doing something different with her hair.”

That’s why Tuesday was such a surprise for many in the company because a camera crew from The Marilyn Denis Show descended on Fibernetics to whisk her away for a three day makeover in Toronto, and then a live shoot of the show on Friday celebrating her, and and her best friend’s, victory over breast cancer.

Dawn and Sandy Peacock Fullerton wrote into the show thinking that their story of how they became best friends while battling the disease together, was worth sharing and Marilyn agreed.

The camera crew ambushed her in the cafeteria, with the entire staff in tow, where she was so shocked she was, perhaps for the first time in her life, speechless. 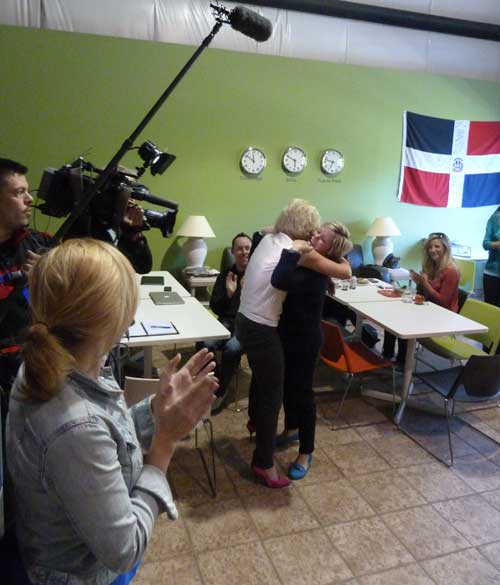 From all of us here at Fibernetics, Worldline and NEWT, have a great time Dawn, and we can’t wait to tune in Friday to see your national television debut. 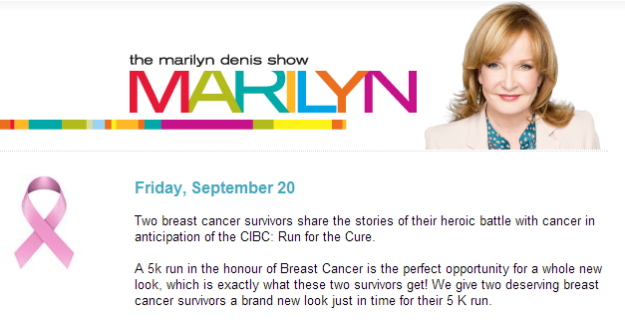